The Lettermen will make their debut appearances as part of the Pop, Rock & Doo Wopp Live! series this fall with two 2017 concerts in Florida.  One is as-yet-unannounced but the other, in Clermont, will be on sale soon.  Read on…

The Lettermen name first appeared in February 1958 on the marquee of the Desert Inn Hotel Resort Showroom in Las Vegas.  The vision of The Lettermen was of three very strong soloists who had the ability and showmanship to perform and entertain an audience, but who also had the discipline needed to be group singers. Their sound blended the big band vocal groups such as the Modernaires, Pied Pipers, Mills Brothers, Four Freshmen and the early R&B rock groups such as the Ink Spots, Flamingos and the Platters.

In 1961, The Lettermen began a 25-year run with Capitol Records that produced some of the most enchanting recordings of the era.  The soft, melodic and romantic “When I Fall in Love” and “The Way You Look Tonight” raced up the charts and established The Lettermen as the most romantic vocal group of the sixties.  In almost every poll, The Lettermen were named Best New Group or Best Vocal Group.  The breathy lead you hear on almost all of the group’s hit recordings, Tony Butala, still leads the group today. The ’60’s and early ’70’s saw The Lettermen score over 25 chart hit singles, including “Theme From A Summer Place”, “Goin’ Out of My Head / Can’t Take My Eyes Off You” (the first hit record ever to completely integrate two songs as one) and “Hurt So Bad”.  Their signature sound made romantic standards of songs such as “Smile,” “Put Your Head On My Shoulder,” “Shangri-La,” “Love,” “Traces / Memories” and many more. Butala estimates that the group made some 200 appearances on television shows including shows such as Dick Clark’s “American Bandstand” series, “Shindig”, and “Hullabaloo”.  They were interviewed and performed on talk shows and variety shows with Johnny Carson, Mike Douglas, Merv Griffin, Jack Paar, Milton Berle, Steve Allen, Dinah Shore, and many others throughout the 60’s and 70’s, cultivating new crops of fans.

The Lettermen have also enjoyed international success touring Japan, The Philippines, China, Thailand, Singapore, Korea, Hong Kong, Germany, France, South America, Canada, Mexico and even Saudi Arabia. They have sung and recorded in over 14 languages and have received 18 gold records internationally. Their All-American, clean-cut, no-drugs image may have been a drawback in the hard rock era of the sixties and seventies, but The Lettermen stood by it.  Their look, sound and everything they stood for is as warmly-received and as relevant today as it was then and we are honored to have them grace the stage at the Clermont PAC on April 1, 2017.  They will joined by Rock & Roll Hall of Famer Charlie Thomas’ Drifters and Sonny Turner, former lead singer of The Platters.

The Lettermen are: Tony Butala, Donovan Tea and Bobby Poynton. 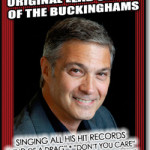