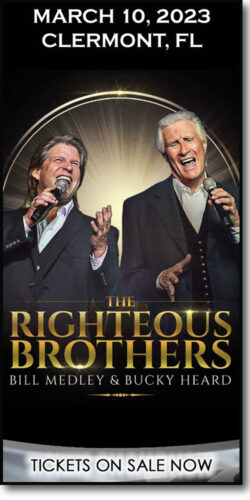 The Righteous Brothers in Clermont

Rock and Roll Hall of Fame duo, The Righteous Brothers, topped the charts for four decades and now, Bill Medley joins forces with one of the most versatile vocalists in America, Bucky Heard, to bring the group back to the stage. Following years of sold-out shows on the strip in Las Vegas, Bill & Bucky have hit the road to bring their unique musical magic to concert stages across the country and on March 10, the tour makes a one-night-only stop at the Clermont Performing Arts Center.

Join us at 7:30 p.m. on March 10, 2023, for this one-of-a-kind concert experience that features a string of The Righteous Brothers’ biggest hits, including “You’ve Lost That Lovin’ Feelin’ (the most played song in radio history) “Soul & Inspiration,” “Unchained Melody,” “Ebb Tide,” “Just Once in My Life,” “Rock and Roll Heaven,” Medley’s Grammy-winning Dirty Dancing theme, “The Time of My Life,” and many more!