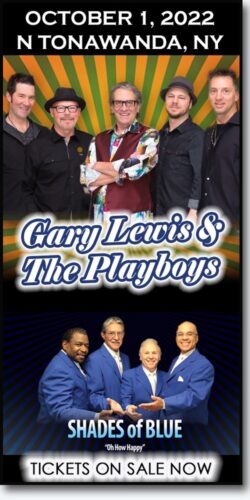 Gary Lewis and The Playboys return to the Riv! The comedy antics of his father, Jerry Lewis, skyrocketed him to fame when he was just barely out of his teens, but in 1965 Gary Lewis & the Playboys released their first single, “This Diamond Ring” and it went straight to number one. That same year, Gary was Cash Box magazine’s “Male Vocalist of the Year”, winning the honor over other nominees including Elvis Presley and Frank Sinatra. An enviable string of hits followed – “Count Me In”, “Save Your Heart For Me”, “Everybody Loves A Clown”, “She’s Just My Style”, “Sure Gonna Miss Her”, and many more. He was the only artist during the 60s to have his first 7 releases reach Billboard’s Top 10. Gary still sounds just like his records and tells the stories only he can tell – growing up in Hollywood, becoming one of the biggest rock stars of the sixties and touring the world with hits everyone knows and loves. We are proud to bring him back to North Tonawanda for one night only!