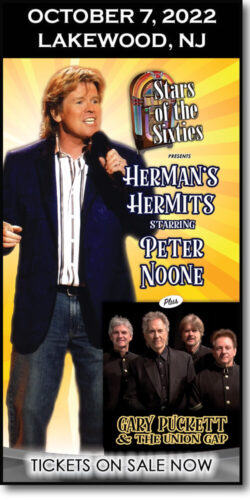 Stars of the Sixties in Lakewood, NJ

The Strand Center for the Arts

For the first time ever, Stars of the Sixties brings Herman’s Hermits starring Peter Noone to the historic stage at the Strand. Heavy on hits, the iconic British pop star carries a playlist that will transport you back in time to the happy days of the 1960s. Known on both sides of the pond for songs like “I’m Into Something Good”, “Mrs. Brown, you’ve Got A Lovely Daughter”, “I’m Henry VIII, I Am”, “Silhouettes”, “Can’t You Hear My Heartbeat”, “Wonderful World”, “Just A Little Bit Better”, “There’s A Kind of Hush”, “A Must To Avoid”, “Listen People”, “No Milk Today” and “The End of the World,” ultimately, Herman’s Hermits sold over fifty-two million recordings. In all, fourteen singles and seven albums went gold. As “Herman”, the photogenic Noone graced the cover of nearly every international publication including Time Magazine. The 1990s found Peter embarking on a four-year stint as the winsome host of VH1’s My Generation, the highest-ever-rated half hour retrospective of pop/rock music. Accompanied by his band, Noone currently performs over 200 concerts a year in addition to hosting “Something Good” on Sirius XM 60s on 6. Peter consistently plays to sold-out venues and his admirers span the generations. If you’re a teenager of the 1960s or just love good music, don’t miss one of the most energetic and fun-filled rock and roll shows you’ll ever see. Peter will be joined by Gary Puckett and The Union Gap – Beginning with “Woman, Woman” in 1967, Gary’s first 5 releases went gold and he went on to sell more records in 1968 than any other recording act – including The Beatles. Puckett’s chart-toppers include “Young Girl,” “This Girl is a Woman Now”, “Lady Willpower” and “Over You”. A Pop, Rock & Doo Wopp Production. 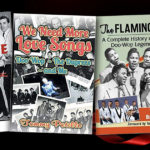 The book The Flamingos: A Complete History of the Doo-Wop Legends by historian Todd Baptista is the definitive chronology of one of the most revered groups in the history of rock and roll.  The book promises (and delivers) the goods on the group’s “back-room record deals, life on the road, the creative process, meticulous recording sessions
Read Full Article Here