Jay and the Americans with Chris Ruggiero in Fort Pierce

Jay and the Americans come to Fort Pierce! With a staggering 18 charted hits and five Top 10 records, few bands ever reached the heights of Jay & the Americans. “This Magic Moment”, “Only in America”, “Cara Mia”, “Come a Little Bit Closer”, “Some Enchanted Evening”, “Let’s Lock the Door”, “Walkin’ in the Rain” and more are on tap for an evening filled with hits and stories only they can tell.

The group features original members Sandy Deanne, Howie Kane and Marty Sanders joined by their powerhouse lead singer for the last 15 years, Jay Reincke – they are one of the few artists of the era that still boasts 3 original members.

Joining them will be PBS-TV star, Chris Ruggiero. Chris has been touring the country breathing new life into classic rock and roll tunes, working with the same arranger who created all the hits for Frankie Valli & the Four Seasons and selling out shows from New York to Vegas. His most recent tour hit 37 cities but this will be his first time ever at the Sunrise Theatre! Whether you’re a teenager of the 1960s or just love good music, don’t miss one of the most energetic and fun-filled rock and roll shows you’ll ever see. A Pop, Rock & Doo Wopp Production. 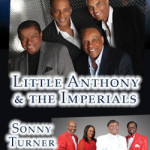