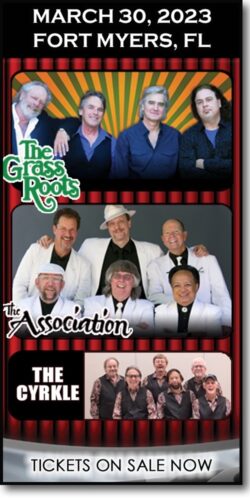 Stars of the Sixties in Fort Myers

Stars of the 60s return to Fort Myers – it’s like THREE CONCERTS in one night with an all-new line-up of hit-makers from the greatest era of rock and roll! In the entire history of rock and roll, only 9 bands have charted more hits on Billboard’s Hot 100 than The Grass Roots. The band charted 29 singles, 13 of which went gold followed by 2 gold albums and 1 platinum album. For almost 50 years they have been one of the most recognized groups on “Classic Rock” stations across the country with over 20 million records sold worldwide. Hits include “Midnight Confessions”, “Temptation Eyes”, “I’d Wait a Million Years”, “Live for Today”, “Sooner or Later” and dozens more. The Association will join them, who have sold over 80 million records, tapes, CDs and DVDs, earning six gold and three platinum discs along with seven Grammy Award nominations. “Windy”, “Cherish”, “Along Comes Mary”, “Never My Love” and “Everything That Touches You” receive almost as much airplay today as they ever have, and on Thursday, March 30th, you’ll get to hear them all live. Plus… The Cyrkle, reunited with their original lead singer after 50 years (“Red Rubber Ball”, “Turn Down Day”). Don’t miss this one-night-only reunion!

NESBIT, Miss. (Dec. 19, 2019) – Music icon Jerry Lee Lewis received a marker on the Mississippi Country Music Trail Thursday afternoon at The Lewis Ranch, his longtime home in Nesbit, Miss. The event was his first public appearance since a minor stroke in March of 2019 and signals a productive 2020 for the Rock
Read Full Article Here