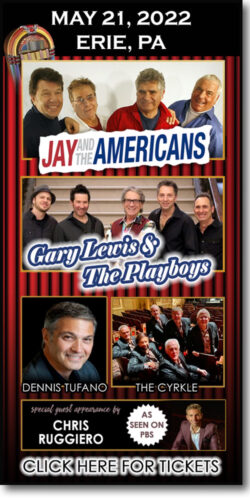 Stars of the Sixties in Erie, PA

Stars of the Sixties are coming to Erie for one night only!  Jay & the Americans take the stage singing all their hits… “This Magic Moment”, “Cara Mia”, “Come a Little Bit Closer”, “Some Enchanted Evening”, “Walkin’ in the Rain”, “Only in America”, “She Cried”, “Let’s Lock the Door (And Throw Away the Key)” and more.  With a staggering 18 charted hits and five Top 10 records, few bands ever reached the heights of Jay and the Americans.  They’ll be joined by 4 more of the era’s biggest hit-makers.  Gary Lewis & the Playboys started their career in 1965 at the top of the charts with “This Diamond Ring” and then, in total, his first 7 releases hit Billboard’s Top 10 – among them “Count Me In”,  “Save Your Heart For Me”, “Everybody Loves A Clown”, “She’s Just My Style” and “Sure Gonna Miss Her”.  Gary still sounds just like his records and tells the stories only he can tell – growing up in Hollywood the son of one of the most famous stars on the planet, becoming one of the biggest rock stars of the sixties and touring the world with hits everyone knows and loves.  Plus… Dennis Tufano, singing all the songs he made famous as the lead singer of the Buckinghams (“Kind of Drag”, “Don’t You Care”, “Susan”, “Hey Baby! They’re Playing Our Song”, “Mercy, Mercy, Mercy”, “Back in Love Again”), The Cyrkle, reunited after 50 years (“Red Rubber Ball”, “Turn Down Day”) and Chris Ruggiero will make a special guest appearance following his rise to fame on PBS-TV, singing 60s favorites you know and love. Don’t miss this sixties reunion! 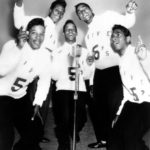 In 2010, I was asked to edit and help publish an interview with Eugene Pitt, original lead singer of the Jive Five, as conducted by Bob Miner, for Keep Rockin’ magazine.  With Gene’s passing, I thought it was appropriate for fans to hear his history in his own words and also read some kind words
Read Full Article Here