….and 5 more things you didn’t know about Jay & the Americans 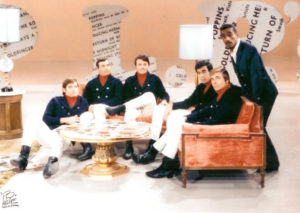 Jay & the Americans on the set of Hullabaloo with Sammy Davis, Jr.

In April 1964, Jay and the Americans were riding high, having had a couple of hits under their belt and working on driving their new single, “Think of the Good Times”, up the charts. The group made an appearance on the TV show Hullabaloo which happened to be hosted that day by Sammy Davis, Jr.  Sammy took a liking to the group and the group revered Sammy.  “What sealed the deal was when he found out that we were Jewish,” recalls founding American Sandy Deanne.  He invited them to his home for a Passover Seder that same week. He also mentioned that he would be on the Tonight Show, guest hosting in the absence of Johnny Carson in a couple of weeks.  The group remarked that they would love to do the Tonight Show as they were all avid fans.  “But we knew that [the show’s booker] Freddie de Cordova and [host] Johnny Carson were both anti-rock ‘n roll,” recalls Sandy.  Sammy said he would make a call and try to get the group on one of the episodes he was hosting.  He called Freddie de Cordova while the group waited and watched.  Sammy pitched the idea to de Cordova and they thought they might be out of luck when they saw the expression on Sammy’s face as de Cordova apparently denied Sammy’s request on the other end of the line.  That disappointment turned to shock quickly though, as Sammy told de Cordova that if he couldn’t have the group on, they should find another guest host.  Davis hung up the phone and told the group it was a done deal.  “We were awestruck,” says Sandy. 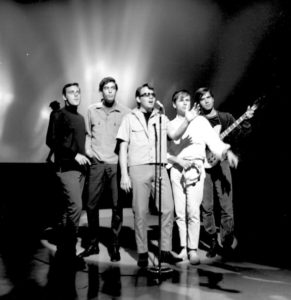 United Artists (the record label for whom the group was recording at the time) was as ecstatic as the group was since they were getting ready to release a new single called “When It’s All Over.”  On the flip-side of “When It’s All Over” was a song called “Cara Mia.”  The song had been a hit for David Whitfield in 1954, whose vocal was accompanied Mantovani’s orchestra on the recording.  Jay and the Americans had begged the record label to allow them to record the song for years.  They had been doing it in their live show since 1963 but when they asked the record label to put it out as a single, they looked at Jay #2 and said, “Who do you think you are?  Alan Jones?”  Well, finally the record label had relented and allowed the group to record the song as the B-side to “When It’s All Over”.  United Artists thought for sure the group would sing the intended “push” side on the Tonight Show appearance.  Instead, the Americans handed the band sheet music to “Cara Mia.”  At first, United Artists was horrified as they had already begun promo on the A-side of the record.  But as calls came in to NBC studios asking where they could buy this new record by Jay and the Americans, NBC referred those calls to United Artists.  UA realized they had a hit on their hands and immediately begin promoting “Cara Mia” as the hit.  “Cara Mia” hit the charts in May 1965 and peaked at number 4 nationally.  But its likely that none of it would’ve happened if it wasn’t for Sammy Davis, Jr. 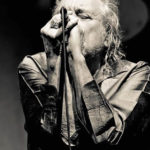