Donald Riggio‘s life was set to a rock and roll soundtrack, so its no wonder his novels would follow suit.  The Bronx-born author has just published the third in a series of novels using the first decade (or so) of rock and roll as a backdrop.  The novels have even spawned an original song, “Bouncing a Kiss Off the Moon”, written and recorded by former Mystic Mike Miller.  (Miller is the host of the Harmony Street internet radio show, named after another of his former singing groups.)  The title of the latest installment is “When Gold Turns to Gray.” 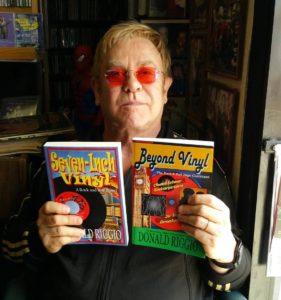 The series chronicles the history of rock and roll through the eyes of fictional characters who interact with real people in music and world history.  According to Riggio, he hopes to demonstrate how music affects and is affected by the events portrayed.  Book one, Seven-Inch Vinyl, covers the years 1953 thru 1968.  The Second, Beyond Vinyl, seamlessly continues the story-line between 1969 and 1986. The newest, When Gold Turns to Gray, carries on from 1986 and into the new century culminating with the events of September 11, 2001.

Riggio currently makes his home in Las Vegas, where he and his wife Carol spear-headed “Doo Wop in the Desert.”  The organization brought several vocal group luminaries to the area over the years.  The Riggios got the endorsement of a lifetime when their friend Rich Rosen gifted a couple of books to a famous customer.  It seems Elton John is a repeat visitor at Rosen’s Vegas record store, Wax Trax.  Rosen snapped a photo for his friend – Elton John mugging with the first two Riggio novels.

For fans of his books, the doo wopp-loving author says he’s got one more in him.  Seven-Inch Vinyl: A Final Encore will bring the story current. Though he says he alludes to contemporary genres, he remains faithful to the main focus of vintage rock and roll.