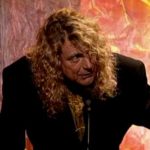 1.  Robert Plant is forever enshrined in hard rock history as Led Zepplin’s wailing frontman.  However, not many know that Plant was a big fan of doo wopp – particularly, the Capris.  When Rhino was churning out the “Doo Wop Box” series, A&R VP James Austin thought to ask some rock and roll luminaries to choose a favorite doo wopp song for inclusion in the set.  Plant chose “Indian Girl”, the flip side of “There’s a Moon Out Tonight.”  In his 1995 Rock & Roll Hall of Fame induction acceptance speech, he got more specific about The Capris’ influence on his vocal style.  “We looked to America from an early age and we admired the work of Howlin’ Wolf, the writing of Willie Dixon, the playing of Muddy Waters and the singing of the Capris, the Jive Five and Ral Donner… American music that really formed our musical personalities.” 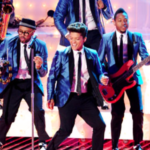 2.  Bruno Mars has frequently alluded to his love of doo wopp, and it’s no secret that while his stage career began impersonating Elvis, he made his bones making guest appearances with his father’s doo wopp group, the Love Notes.  In those appearances, Bruno emulated Frankie Lymon’s vocals and choreography, complete with splits.  In 2010, at the request of Rolling Stone, Mars compiled a playlist of his favorite doo wopp songs.  The list included: “I Only Have Eyes for You” by the Flamingos (which he credited as the primary influence in his songwriting break-out, “Nothin’ on You”), “There’s a Moon Out Tonight” by the Capris and “Please Say You Want Me” by the Schoolboys (which he frequently performs live alongside his original material.) 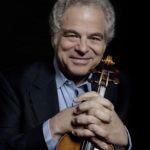 3.  Itzhak Perlman, an internationally-renown violin virtuoso and winner of 15 Grammy Awards, digs doo wopp. Perlman, who played the violin solos on the Schindler’s List soundtrack, says he loves to watch doo wopp specials on PBS.  In 2014, the public television series included an interview with Perlman on the topic in “Doo Wop Discoveries.”  In 2014, Itzhak Perlman took the stage with a pick-up doo wopp group at a Sarasota, Florida fundraiser.  He showed off his singing chops on the Five Satins’ “In the Still of the Night”, among others. 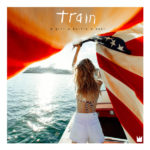 4.  Train’s LP “A Girl, a Boat, a Bottle” featured the song “Play That Song”, set to the tune of “Heart and Soul.”  It was instantly deemed a neo-doo-wopp confection by many major music review outlets, in the vain of Meghan Trainor’s and Bruno Mars’ frequent tips of the hat to the genre.  However, many overlooked the more overt doo wopp homage on the album, “Valentine”.  The song kicks off with a bass line straight out of 1961.  One can’t help but wonder if Train’s “Calling All Angels” lifted its title from the Crests’ hit “Trouble in Paradise.”  The latest album has launched the band back on tour, where they’re frequently sharing the stage with Hall and Oates.  Listen here.

5.  Frankie Valli could very well be considered a doo wop singer himself.  He certainly bridged the gap from the street corner vocal groups of the 50s to the self-contained quartets and quintets that dominated the 60s.  Valli and the 4 Seasons not only recorded dozens of doo wopp classics, such as the Mello-Kings’ “Tonite, Tonite”, the Harptones’ “Life is But a Dream”, and the Willows’ “Church Bells May Ring”, but they frequently included an acappella segment in their live shows into the 90s.  The band would abandon their instruments and position themselves on a prop stoop.  There, they would sing “Blue Moon” or “A Sunday Kind of Love.”

6.  Tony Orlando – Although his singing career began with an unrecorded doo wopp group, Tony typically neglects his early hits reminiscent of the genre when performing.  (Think “Bless You” and “Halfway to Paradise.”)  However, he frequently includes songs such as “Tears on My Pillow”, “Earth Angel” and “Silhouettes” in his show. In the late 90s, Orlando created a scripted stage show called “Jukebox Dreams”.  This show chronicled a doo wopp group whose heyday was long past but still dreamed of hitting it big.  Tony included a few original tunes as well as a slew of doo wopp standards.

7.  In a 2002 interview, Red Hot Chili Peppers lead singer Anthony Kiedis revealed a previously-uncited influence.  “John (Frusciante) and I are both very much in love with doo wop – vocal music from the fifties.”  Frusciante was the band’s guitarist and largely responsible for the arrangements on the band’s LP “By the Way.”  While the press credited the Beatles and Beach Boys for the inspiration, lead singer Anthony Kiedis revealed the deeper roots of the influence.  If there was any doubt about just how serious Frusciante was about his love of doo wopp, he’d frequently sing the Chantels’ “Maybe” in RHCP live concerts.  Click here to see “Maybe” by John Frusciante. 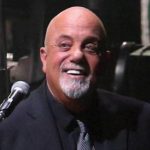 8.  Any doubt about Billy Joel’s admiration for doo wopp will be allayed with a single play of “The Longest Time.”  While it’s well-known that he modeled “Uptown Girl” after the Four Seasons’ sound, he has frequently mentioned the group’s forerunners such as Little Anthony & the Imperials as being early inspirations to him when he was growing up on Long Island.    Click here to see Dion, Frankie Valli, David Ruffin, Eddie Kendricks, Ben E. King, Graham Nash and more sing “The Longest Time.”

9.  Frank Zappa – Long before he and the Mothers of Invention put out their ode to doo wopp, “Cruising with Ruben & the Jets”, Zappa was proclaiming his love for the seminal group harmony sounds of the mid to late fifties.  His most notable contribution was the Penguins’ “Memories of El Monte”, which he wrote and produced.  Zappa stated that “Riot in Cell Block #9” by the Robins was the first record he ever bought and that he stopped listening to the radio after 1962.  His 1984 LP “Them or Us” features a cover of Earl Lewis & the Channels’ “The Closer You Are.” 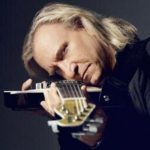 10.  While the Eagles were influenced by a number of west coast bands including the Byrds and the Beach Boys, Joe Walsh (#54 on Rolling Stone’s list of “100 Greatest Guitarists of All Time”) says, “My first influence was rock ‘n roll from the mid-fifties to the early sixties doo wopp and things from that era.”  He made the statement in an interview with Music & Musicians magazine in June 2012.