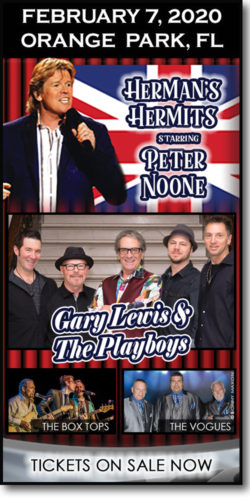 Stars of the Sixties at Thrasher-Horne Center

Stars of the Sixties are back at the Thrasher Horne Center, with an all-new line-up featuring dozens of hit records sung by the original artists who made them!  Herman’s Hermits starring Peter Noone, Gary Lewis & the Playboys, The Vogues & The Box Tops.

You’ve seen him hosting television’s “My Generation”, heard him hosting his own show on Sirius XM 60s on 6, now hear all of his hits live in person – Herman’s Hermits starring Peter Noone will sing all their hits like “I’m Into Something Good”, “I’m Henry VIII”, “Mrs. Brown You’ve Got a Lovely Daughter”, “A Kind of Hush”, “Listen People”, “A Must to Avoid”, “Can’t You Hear My Heartbeat” and more!

In 1965, Gary Lewis & the Playboys released their first single, “This Diamond Ring” and it went straight to number one.  In total, his first 7 releases hit Billboard’s Top 10 – among them “Count Me In”, “Save Your Heart For Me”, “Everybody Loves A Clown”, “She’s Just My Style”, “Sure Gonna Miss Her”, and many more.  Gary still sounds just like his records and tells the stories only he can tell – growing up in Hollywood the son of one of the most famous stars on the planet, becoming one of the biggest rock stars of the sixties and touring the world with hits everyone knows and loves.

The Vogues took the nation by storm with a cavalcade of top-ten smash hits like “You’re The One” and “Five O’Clock World,” before transitioning from their blue-collared rock roots to the lush harmonies of pop-rock standards such as “My Special Angel” and the one that they recently performed on PBS-TV to a rousing standing ovation, “Turn Around, Look at Me.”

The Box Tops were trail-blazers in the 60s and one of the most influentiall bands of the era.  They are back and better than ever featuring original members Gary Talley and Bill Cunnigham who played on all their hits like “The Letter” and “Cry Like a Baby”.

Don’t miss this one-night-only reunion of 4 of the biggest hit-makers of the 60s!  A “Pop, Rock & Doo Wopp” production. 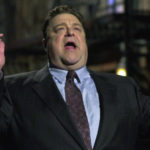 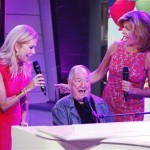